My eldest son, taken from me so tragically.

I should have known Vince, this world was never meant for one as beautiful as you. I miss you so very much… We will meet again.

Nick and Vincent went out for an hour or two on a Friday evening. Not having any money, they said they would probably just sit at Nick’s house, and listen to music. I never saw Vincent again.

Nick lost control of the GTI Golf, and the car hit a tree, they were both killed instantly. The post mortems revealed that they were both far over the alcohol limit. Vincent had a drivers licence, Nick didn’t, but, would this have changed anything, I don’t know.

Speed and alcohol, something needs to done! 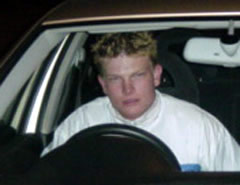