Our wonderful son and older brother, Stuart Macphail, died tragically on 6th December 2005. He was 19 years old, with his future full of promise.

We miss him so much. He attracted people to him with his exuberance and warmth, as well as his incredible zest for life. He never wasted a minute of his time, and embraced every aspect of his life. The joy that he gave us will sustain us through the terrible sense of loss. He will remain a bright light in our lives forever.

Stuart died December 6th at 01h00 in the morning. He was the passenger in a car that skidded and hit a tree 750m from home.

He was killed instantly. The car was speeding, and the driver was reportedly drunk, but was not tested. The police have never even taken a statement from the driver, nor from the passenger in the back seat who also survived the crash. We don’t even know if the police have checked to see if the driver had a valid licence. My son had had too much alcohol, and decided to leave his scooter behind, and had ordered a taxi. A friend drove past and offered him a lift home, just a short trip of 3km.

Being a bit drunk, I believe that my son was not able to make a responsible judgement of the sobriety of his friend, and this was a fatal error in judgement that many teenagers sadly make. 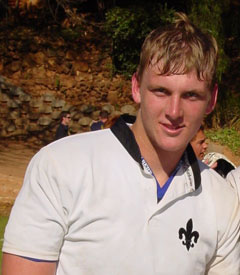