Martin was a very outgoing person, who would rather do things for his fellow people than for himself.

He was a person who lived everyday as if it was the last. He would never say something wrong or ugly about someone, because he regarded everyone else he knew or met as his friend and would walk the extra mile for this person.

He did all kinds of sports and adventures because he was an outgoing bubbly person. The sports that he did and achieved good results in were hang gliding, off-road racing (sand masters), and drag racing. He was also very good with designing things and making it. He bought a kombi body from the scrap yard and rebuilt it to a running vehicle. The same he did with the sand master which was built from scratch.

Martin went to visit a friend on the night of 26 March 2005. He was on his way back from Centurion towards Waverley (N1 North) at 00:00, when another vehicle (a minibus taxi) was driving on the N1 North towards Johannesburg (South). The flying squad got a call from another driver spotting the vehicle on the wrong side of the road and straight away had a vehicle on his way to pull it off together with the metro police who also had a vehicle to pull off the taxi. They, however, were both too late. The taxi had a head on collision around 00:30 on 27 March 2005 and Martin was killed instantly.

The taxi had no head lights on and the driver and passengers were under the influence of alcohol. When they had the collision, one passenger fell out of the vehicle and was at that stage still alive when both vehicles burst out in flames. Another vehicle stopped at the scene and tried to help the passenger who fell out of the taxi, but he later died on the scene.

Martin was 33 years old when he died. He was divorced with two children age 9 and 4 (Donique and Mické) 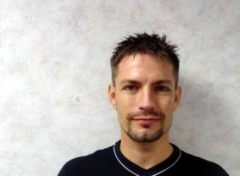