A drunken driver, Andre Craig, with a confirmed BAC of 0.25g per 100 ml blood, apparently he drove the wrong way down the offramp onto the N2 freeway near Hammarsdale into oncoming traffic which resulted in a head on collision with a BMW.

The BMW, with 5 people in it, burst into flames, trapping the two boys- my son (Kevin 10)  his cousin (Kimeson Reddy 7) and burnt them to death.

The rest of the family were highly traumatised by not being able to get the two boys out of the car.

The drunk driver was the person in the other vehicle who caused the accident.

He came out with barely a scratch and was taken into custody.

The next day he complained of stomach pain and was taken to the local hospital and died while in the waiting room.

The wife of this man sued the SAPS for not getting her husband immediate attention and won the case for R2.2 million.

The irony of it all : the family of the person who caused the accident benefitted financially from my little boy’s death.

Comments in Witness after the story- http://bit.ly/QiL9Pf 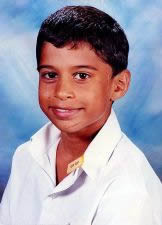