To my beloved brother Jacques, I miss and love you more everyday. My heart is broken.

You lived life to the full and I cannot believe that you are gone. We had no chance to say goodbye. I will love and miss you forever. Ride on Croc.

‘On Saturday 9 December my brother was involved in an accident with a drunk driver. Jacques was on his motorbike and was returning from a charity run. On his way home, a drunk driver made a U turn straight into Jacques’ path. At 20h14 on 9 December 2006, my beloved brother was declared dead. The cause of death: multiple organ failure.

His injuries were severe -haematoma on his brain, ruptured spleen, ruptured liver, all his ribs broken on the left side, broken leg and left knee, 2 broken ribs on the right. Injuries to the drunk driver – zero! How unfair!’- Michéle

‘Jacques is and always will be my yesterday, my today and my tomorrow. He was my best friend, lover and soulmate. He was tragically taken from me and his family on Saturday 09 December 2006. He was an excellent motorbike rider and when I was with him on the back had complete faith in his ability to handle the bike and always took part in all the charity runs that were in and around Port Elizabeth. On this fateful day on his way home from yet another charity run, a drunk driver, after having been kicked out of the pub for causing trouble, drove up the road and made a U-turn in front of him. Although being a skilled driver he stood no chance and the drunken driver walked away with a scratch. Now those left behind have to face the day to day world knowing that we will never get to see, touch or hear this remarkable person again. The culprit has so far been released on bail twice although he has 3 previous convictions for drunken driving and now the fourth one with capable homicide added. He gets to see his loved ones, but we are not afforded the same privilege. Where is the justice in this world?’

My beloved, I never knew such a person could exist until I met you. Somehow, out of all the twists and turns our lives could have taken, and out of all the choices we might have missed, it always seems like we were given a meant-to-be-moment – to meet, to get to know each other, and to set the stage for a special togetherness. When I was with you I knew that I was in the presence of someone who made my life more complete than I ever dreamed it could be. You took my thoughts to places where my troubles seemed so much further away and my joys felt like they were going to stay in my life forever. I pray that you could have stayed forever. I feel like you’re my soul mate. My world was reassured by you, my tomorrows need to have you near, so many of my smiles depended on you, and my heart was thankful that you were here.

The nicest feeling I’ve ever known is being in love with you. For bringing me happiness as though it were a gift I could open every day, I thank you. For listening to all the words I want to say, I appreciate you. For being the wonderful, kind and giving person you are, I admire you. For being the most beautiful light in my life, I desire you. For being everything you are to me and for doing it all so beautifully, I love you. It would take forever to find words for all the thanks I would like to express about the deeply reassuring feelings I have felt in your acceptance of me. And it would take an eternity to give back even half of the happiness you’ve gave. But until forever is here, until a lifetime is lived and until eternity comes along I will hold you in my heart more gently than any feelings. I will keep you on my mind more lovingly than any thought, and I will feel blessed by your presence more than you will ever know. I love you sweetie!

The family “resigned to fact that justice will never be served and that the guilty party has in effect gotten away with “murder”. 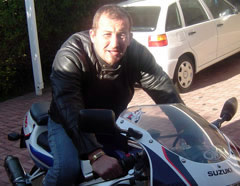