Andrew was one of the finest young men who ever lived and we are so proud of him.

He was bright, with a Master’s degree in Historical Studies, and was so enjoying his first job.

He had a heart for the less privileged, working with SHAWCO while a student and traveling to India where he worked among charities such as the Mother Theresa Home in Calcutta.

He was kind, never showing animosity towards anyone. He had a wonderful sense of humour, something that we and his friends all remember him for.

We miss him so, but are so grateful for his life, that all our memories are good, and especially to God that we know we will see him again.

We love and remember him every day!

Our son Andrew, older brother to Ryan, was killed by a drunken driver on 11 May 2007, a week after his 26th birthday. Andrew was on his way home from work, at about 19:00 on that Friday evening. A drunk driver, overtaking three cars on a sharp bend with a double white line, crashed into him, killing him instantly.

The issue of drunk driving was, sadly, not allowed in court.  The reason for this: his blood was taken after 2 hours and a very important reference number on the form was never filled in by police pathologist. Mr Noble broke his one leg very badly in the accident and so I presume that it was because their first responsibility is to save lives that the blood was taken only after 2 hours.

The whole thing was very hard.  Because he pleaded guilty the court case was around extenuating circumstances and we had to listen to what a wonderful man he is & that he had shown true remorse (whom he had shown this too I don’t know as he has never made contact with us and avoided eye contact during the court proceedings).
His lawyer also spent a lot of time saying that Andrew was not wearing a safety belt and that safety belts ‘save lives’. One form showed that he was wearing his belt and one form did not have a tick to say that he had worn it.

We know that Andrew ALWAYS wore his safety belt, as was confirmed by all his friends when they heard this news. If he had not  been wearing a safety belt he would almost definitely have been thrown from the car and he was found lying forward over his steering wheel.

So, not a very satisfactory outcome, particularly the part about the safety belt and the fact that the important reference number was not filled in.

Submitted By: Mark and Lynette Alexander 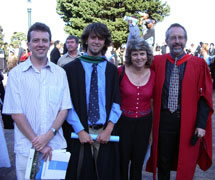