Daughter to Anton and Tosh, sister to Richard (jnr) and Rodrick.

Cindy was a passenger in a vehicle where the driver lost control and crashed, killing Cindy and leaving the driver with a scratch.

Cindy our youngest child daughter to my wife Tosh and I, sister of our two sons Richard (Jnr) who is 36 and resides in Chicago U.S.A. and to our other son Rodrick who until recently was an educator at Saint Albans College Pretoria. Our beloved Cindy had completed her B.A. Journalism Media degree and was a full staff member at The Pretoria News, reporting mainly on Crime and some general reporting. Cindy was well loved by all and known to so many, from the Mayor of Tshwane to the normal policemen/women. Cindy did her high school at the Willow Ridge High School and was a member of the class of 1999. Today is the sixth year since we lost our beloved angel Cindy I sadly do not know what else to say. So confused and sad. You may read more about her on Google. Either Google ‘Cindy Zilhofer South Africa’, here you will find pages and pages of her articles. You may also Google ‘cindy zeilhofer poem’. A beautiful poem written for her by Luschka (‘Starlite cafe’) .Cindy is the blond Angel in the surrounding pictures.

Cindy was a passenger in a car driven by a friend of our son Rodrick. The driver lost control of the vehicle and crashed into a tree stump in Simon Vermooten road, just off Lynwood road in Equestria. Cindy died instantly. The driver aged 25 at the time had a slight scratch on his forehead. Sadly this accident happened at around midnight on June 10th 2005. 400 meters away from her townhouse that she had so proudly bought.

As in so many cases in SA, the alcohol blood tests of apparently 0.25 g went missing (conveniently so). The driver was charged with drunk and negligent driving, the alcohol charges were dropped. They did, however, manage to save the results of the blood tests of Cindy. The driver was found guilty after a three year trial on the charge of reckless driving and manslaughter, full publicity was given in The Pretoria News. It would be so painful to read these articles during those long three years and the sentence given to driver was a slap on the wrist and a R10 000 fine plus a suspended jail sentence. I think this was suspended for a period of three years.

Nothing sadly will bring our beloved Angel Cindy back. 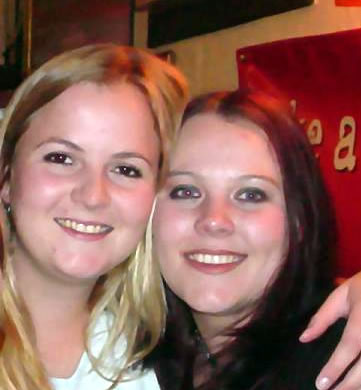 Had I a glass in hand
It would’ve shattered

The young don’t die!
we’ll outlive time
Or so we have believed

Why? How?
It must be a mistake!

She’s only 23
And I promised her photographs
I’ve not yet had time to send!

Why a beautiful life had to end.

~ For Cindy Zeilhofer, who died tragically on the weekend.
Photo taken 27 April 2005, Cindy & me in Pretoria, South Africa
By Luschka